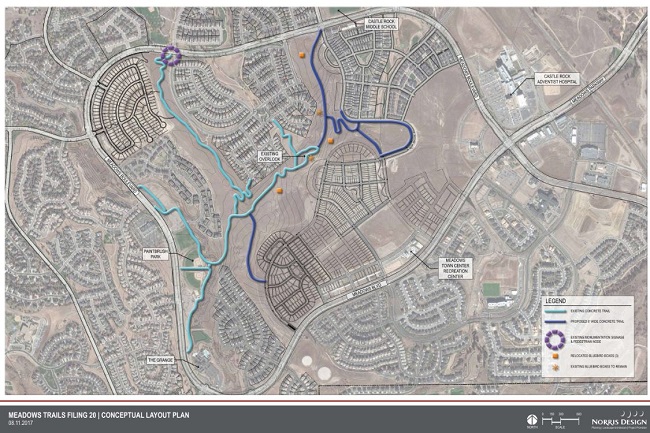 They Paved Paradise and Put Up a…

More than 88 miles of trails run through the Town of Castle Rock with around 5,700 acres of open space. Native Legend Trail is an extensive system connecting the natural landscape of western Castle Rock to Downtown. The paved trail meanders through The Meadows blurring the lines between open space, residential, and commercial property allowing users to ride, walk, and coexist with the natural Colorado landscape.

Though recent activity in the open space inside Meadows Boulevard looks destructive, Castle Rock Development Company is actually constructing trail to expand the Native Legend system. Trail completion will encourage greater access and connectivity with Castleview High School, The Meadows Town Center, and Meadows Boulevard. The project also includes some sidewalk completion and landscape work in Upland Park to merge new with existing and to tidy up unfinished projects. It will also allow for more connection points in the Community in the future.

Trail work will conclude in May and will complete the Native Legend Trail system through The Meadows. The expansion solidifies natural foot paths or, “desire lines,” while preserving remaining open space. The map illustrates the existing trail as well as the trail under construction. A little dirt work will mean a lot of enjoyment for years to come!